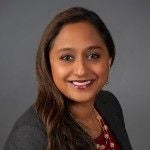 Aarati Subramaniam is a mediator with JordanADR and a registered neutral with the Georgia Office of Dispute Resolution. She believes her background as a first-generation American, her years of practice, and her commitment to alternative dispute resolution bring a unique perspective to the mediation process.

For over fifteen years, she has been practicing workers' compensation litigation at a large Atlanta-based law firm, and has represented clients at all levels of appeal. Prior to that, she served as a judicial law clerk for the Honorable Neal W. Dickert and the Honorable James G. Blanchard in the Tenth Judicial Circuit of Georgia.

She holds a B.A. in Psychology from Smith College, and a J.D. from Emory University School of Law, where she received an award for Best Speaker during the Appellate Argument competition, as well as a full scholarship.

Aarati has contributed several articles on topics of workers' compensation law for the Drew, Eckl, & Farnham, LLP Journal, and she has published papers and been a panel speaker for the Advanced Workers' Compensation Law Institute, in 2011 and in 2015.

She has spoken at various client seminars on topics like Controlling Medical Costs and Violence in the Workplace, and most recently, she appeared as a panelist for an ethics segment as part of the "ADR in Workers' Compensation" seminar in March, 2019.

Aarati was named to the 2013 Inaugural Hot List for Lawyers of Color, and she holds a Preeminent Five Star Peer Review Rating from Martindale-Hubbell.