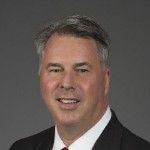 Terry studied History at Arizona State University and graduated in 1983. He then took a couple of “gap” years, saved his money and spent a summer traveling through Europe before entering law school at Northern Illinois University. He graduated in 1988 and immediately began trying cases at the Illinois Attorney General's Office in Springfield. While there, Terry met his future wife Robin and she persuaded him to leave the frozen tundra and move to Atlanta, Georgia in 1993.

Terry spent nearly 20 years at Drew Eckl & Farnham representing employers throughout the State of Georgia.  In 2012, Terry opened The Rock Law Firm, LLC in downtown Decatur, near his home, in order to be closer to his daughter, Madeline and son, Jackson as they started high school.  It worked! Madeline graduated from Furman University and Jackson is a rising junior at Oglethorpe University.

As a long-time practicing defense lawyer, Terry has been involved in the mediation process since 1994. He estimates that he successfully resolved at least 500 cases as an advocate through mediations. In 2018 Terry decided to undergo the 40 hour training session at Henning Mediation to become a certified Neutral in Georgia. Acting as a Neutral has come easy to Terry. His goal is to gently engage the parties in discussions. By sharing information among the parties and occasionally pointing out weaknesses, he has had a 90% success rate.  Terry is excited to work with Jordan ADR and looks forward to helping you settle your case in the future.