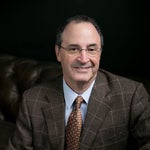 After spending the early part of his career handling a wide variety of civil and criminal cases, the overwhelming majority of Todd's law practice over the past 30 years has been devoted to the representation of injured workers in workers' compensation claims.

Todd has litigated hundreds of workers' compensation cases, and has appeared on behalf of his clients in superior courts throughout the state. He has argued before the Court of Appeals of Georgia (where he has authored and filed over 30 appeals and applications for appeal), and the Supreme Court of Georgia.

Outside of work, Todd's interests include playing guitar and mandolin, and golf.